I’ve written a post similar to this in the past but it bears repeating as my audience is particularly ripe for this kind of education, being mostly men. I believe that most men, especially submissive men, are good guys, they get it, they’re respectful. The genuine shit heads are the extreme minority. Then there’s the guys who are good at heart but misguided, uninformed & with a bit of education could migrate from the “kind of a shit head” category to the “good guy” club.

I had a mildly bad experience with a private session client this week.

He wrote that he wanted just a foot worship session with some clothed (yoga pants) face sitting, dinner out first. He had requested sessions numerous times over the years & as I rarely accept new clients it had taken that long to actually set it up. I screened him & everything seemed fine. I sent him my FAQ which clearly states my boundaries & I reiterated them in an email: no intercourse, no oral sex of any kind.

Over dinner there was an opportunity to discuss why I take so few sessions these days & one of the reasons I stated was that most guys want what I don’t allow: intercourse & oral sex. I explained that I accepted him because he requested activities that I like & I feel comfortable with.

In the private session he proceeded to try to push those boundaries, mostly verbally but also physically. Not in an aggressive way, but his hands roamed & I had to remove his hands from rubbing my crotch several times while firmly telling him “no”. He asked numerous times to lick my asshole & to have sex with me. When I told him that asking again would result in the session ending early he just stated what he wished for without asking for it: “You’re just so sexy, I would love to fuck you.”

I held my boundaries, stayed profession & the session ended on schedule with the client feeling like he’d had a great experience & he hoped I had a good time too.

Afterward I sent him this email & to any guy who read the above & didn’t really see a problem with what happened, or who thought I should have just kicked the guy out, please read this & try to understand:

“I’d like to provide some feedback on the session last night in an effort to help you understand something important, from a different perspective. So please read with an open mind.

Imagine that you’ve taken your car to a mechanic to get it fixed. You’ve come back to pick up your car after closing time. It’s just you & the mechanic at the shop.

This mechanic is bigger & stronger than you. He tells you it’s going to take an hour to finish fixing your car, you might as well wait. He compliments your ass & it soon becomes clear that this mechanic is attracted to you.

You let him know that you are straight & that you’re not interested. He apologizes but tells you anyway how much he would like to fuck you. Even though you’ve made it clear that’s not going to happen, he tells you a few more times how much he would like to fuck you & asks if he can at least give your ass a squeeze. He’s being nice, not aggressive but he then tries to rub your crotch & asks if he can see your asshole. He keeps asking for more even though you say no.

Again, you are all alone with him & you can’t leave yet because he hasn’t finished fixing your car.

He continues to tell you what a great ass you have, that you’re just so sexy & how much he would like to fuck you.

Are you imagining this? How do you feel? Do you feel uncomfortable? Do you think you would find that fun or enjoyable? He’s complimenting you & just telling you what he would like to do. He keeps asking for what you’ve said no to, but he’s nice about it. He isn’t being aggressive but you don’t know this guy, if you reject him too hard or if you’re rude, who knows what he might do? He might rape you or hurt you. He might not fix your car. You don’t know, do you?

Did you do anything ‘very’ wrong? No. Did you cross the line & make me uncomfortable? Yes. Did you make me not want to see clients because of uncomfortable situations like that? Yes.

I’m telling you this so you don’t do this to other women. If you want sex, hire an escort. I sent you my FAQ which outlines my boundaries clearly. I stated again in email & yet again in person what my boundaries were…yet you continued to try to push them to the point where I had to threaten to end the session early. That’s shitty.”

He did not respond to the email, in case you’re curious. He’s only one guy & maybe I can’t get through to him…but this blog reaches a bigger audience so to you reading this, yes you, don’t behave like that, okay? Respect boundaries. Whether it’s a regular date or a paid date, know that she’s likely on guard, as most women constantly are. Unless you are getting a clear ‘yes’ than it’s probably a ‘no’ or ‘not yet’. Get explicit consent & keep getting it. Accept a ‘no’ gracefully or a withdraw of consent no matter when it comes. Her body, her choice.

Even if you’ve paid for a sexual service, it’s still her body, her choice. A clear negotiation of services for pay helps prevent misunderstandings but paying for one thing doesn’t mean you’re entitled to anything/everything.

Put yourself in the women’s place. Really, that’s the heart of empathy, trying to understand how another person feels. In doing so you are learning emotional intelligence & that is useful as hell in life.

If you already get this, pay it forward, look for opportunities to educate other men by being a good role model or explain this to them. Basically, if men imagined other bigger/stronger men doing to them what they do to women they have an easier time ‘getting it’. It’s not as simple as rape or not, it’s about a potentially threatening situation where rape is possible & you have to ‘handle’ the other person & hope it doesn’t come to that.

Be better men & help other men be better too. 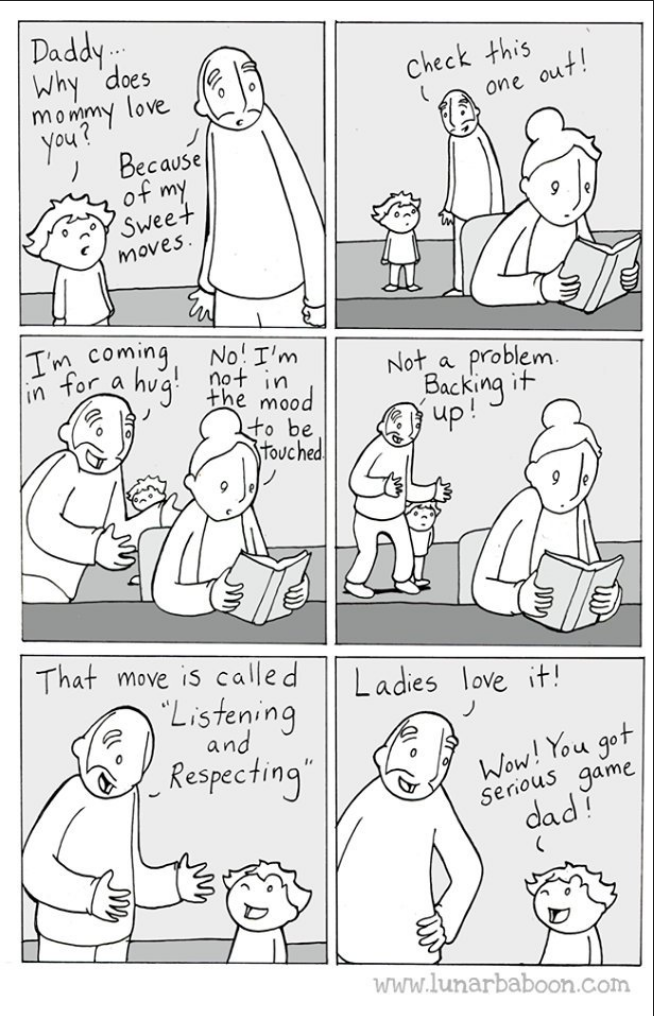